On 14 June 2018, Chartered Institute of Arbitrators hosted the 2018 Roebuck Lecture entitled Arbitration: "the terms they are a-changin'", which was delivered by Dame Elizabeth Gloster. 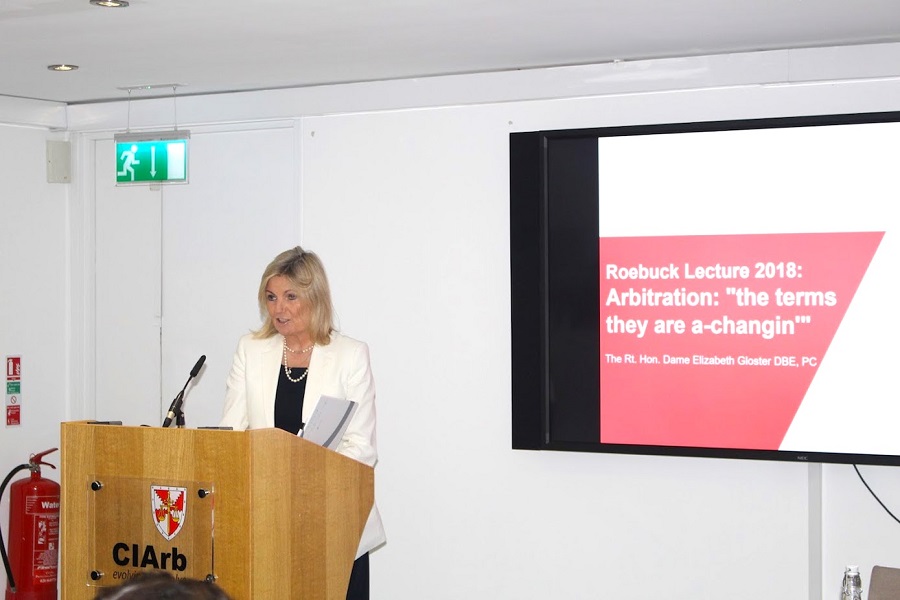 At the beginning of the event, Anthony Abrahams MCIArb (Director General of the CIArb) welcomed the participants and introduced Dame Elizabeth Gloster. He also welcomed the delegation from the China Council for the Promotion of International Trade (CCPIT) which was visiting the CIArb headquarters and attended the lecture.

Dame Elizabeth at the beginning of her speech offered her thanks for the opportunity to deliver the annual Roebuck Lecture on the topic which was so closely connected with her professional experience as a judge. In her speech, Dame Elizabeth focused on three key ways in which arbitration is changing such as ethics, diversity and the continued importance of the common law post-Brexit.

With regards to the problem of ethics in international arbitration, Dame Elizabeth referred to the problem of tribunal secretaries which are commonly used during the proceedings for the sake of time and cost efficiency. The problem arises when arbitrators unlawfully delegate their decision-making powers to the tribunal secretaries which stands in the direct opposition to the core nature of arbitration. The issue was widely considered in the case P v Q[1] where one party made an application to remove members of the tribunal on the basis that tribunal improperly delegated its role to the secretary. The applicant argued that the chairman breached his duty not to delegate by seeking the views of a person who was not a member of the tribunal on substantial procedural issues. Although the application failed as the court decided to retain its supervisory and not interventionist role, there was still a considerable risk that the tribunal secretary would become the fourth arbitrator.

Another current ethical issue mentioned by Dame Elizabeth related to the arbitrators' potential bias and impartiality. She further referred to the Halliburton case[2] where the question of whether an arbitrator can accept appointments in related or overlapping references was addressed. The Court of Appeal held that an arbitrator should have made disclosure of later references but on the facts of the case, the failure to disclose them would not have led a reasonable observer to conclude that there was a real possibility that the arbitrator was biased.

With regards to the above problems, Dame Elizabeth considered whether a universally binding code of ethics for international arbitration can be a solution. She argued that although there is a compelling need for more clarity and transparency regarding ethics, she did not believe that the binding set of ethics rules would achieve that result. The major difficulty with such a binding document was the fact that ethics rules differ from one culture to another and it was impossible to agree on one standard of conduct. As an alternative, Dame Elizabeth suggested a set of international principles or guidelines such as for instance the CIArb Code of Professional and Ethical Conduct which is a reflection of international best practices.

Moving on to the second part of her speech Dame Elizabeth focused on the problem of gender and ethnic diversity which is an often discussed issue in international arbitration community. In this context, she referred to the ICSID statistics which showed that only 4% of the ICSID cases were arbitrated by a non-Anglo-European tribunal. In her opinion, the problem may lay in the fact that an arbitrator's appointment is a clients' choice and parties exercise their autonomy in appointing whoever they prefer. However, while making their choices, parties had developed a habit of continuously appointing the same kind of people. This habit, combined with potential biases can lead to the lack of diversity in the arbitral tribunals. Dame Elizabeth strongly argued that international arbitration cannot be truly international if the set of decision-makers does not reflect the international character of the parties involved. 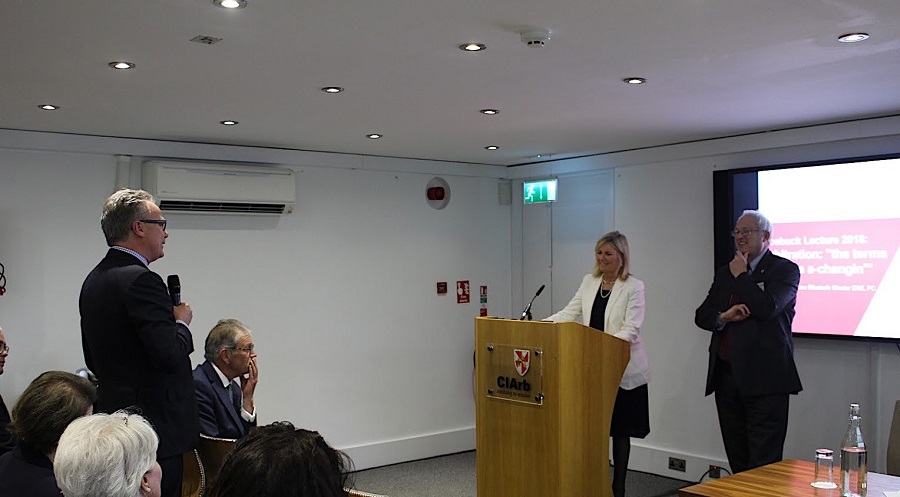 Finally, commenting on the potential impact of Brexit on arbitration in the UK, Dame Elizabeth expressed her strong belief, that London and English law position would remain unchanged. In her opinion, English courts have strong advantages over other jurisdictions such as efficiency, flexibility and ease of enforcement of the awards, which would remain unaffected by Brexit. She was also optimistic about the role of English common law, which in her opinion would remain the most suitable law to govern international disputes.

In the following Q&A session, the participants expressed their questions and opinions regarding the diversity and ethics in international arbitration.

Subsequently, James Bridgeman (President of the CIArb) made a few comments addressing the points made by Dame Elizabeth Gloster and expressed his support for her ideas.

The lecture was followed by a drinks reception with an opportunity for participants to share thoughts and network with each other.