Infrastructure Disputes: What The Future Holds For Us

On 12 September 2019, CIArb’s Dispute Appointment Service (DAS), in collaboration with Deloitte LLP, held a conference entitled "Infrastructure Disputes: What the future holds for us".

At the beginning of the conference, Chris Clements (Deloitte LLP) welcomed all delegates, presented the theme of the event and introduced the panel moderators - Olena Gulyanytska FCIArb (CIArb Head of the Dispute Appointment Service) and Kirill Anurov ACIArb (Deloitte LLP). 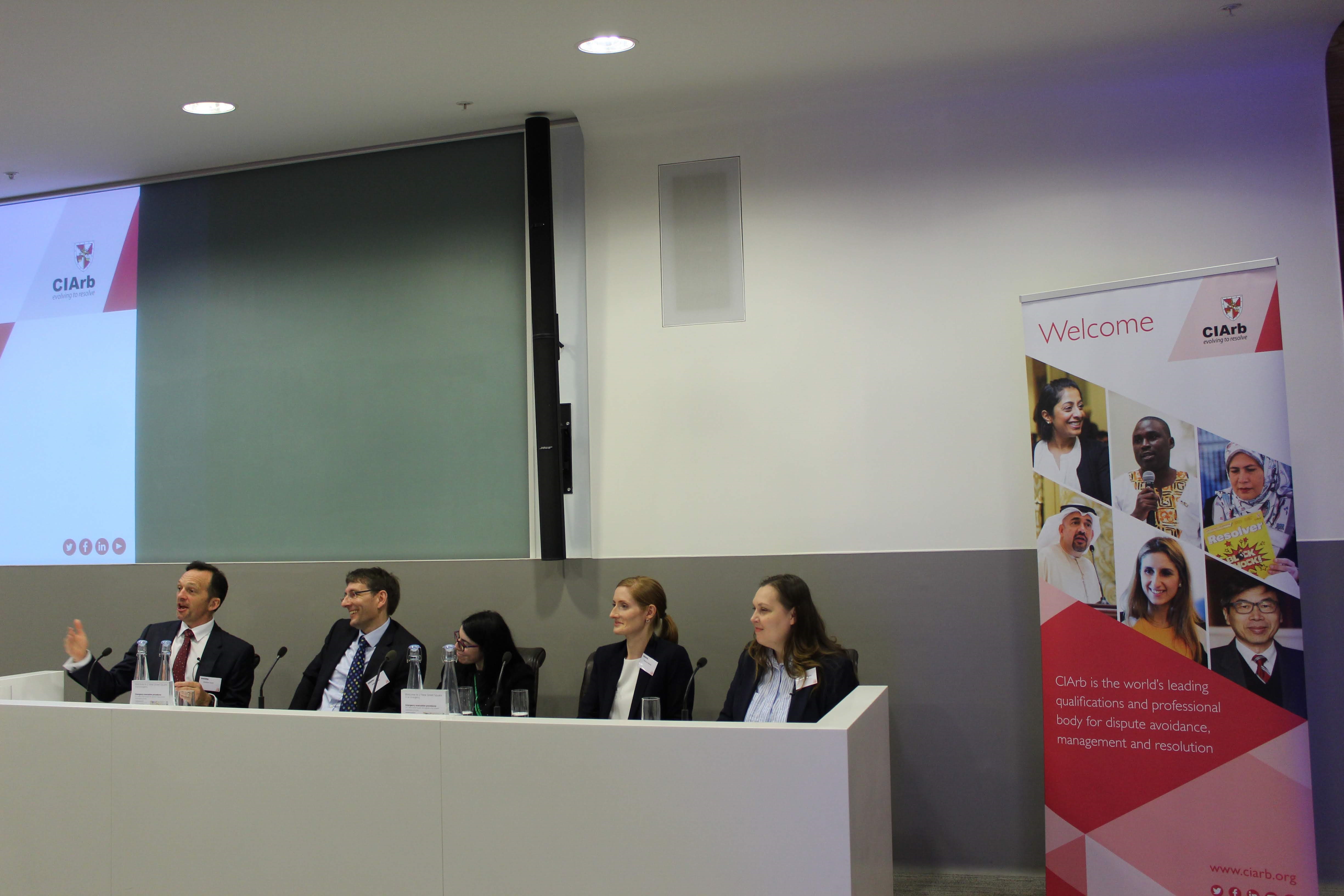 Nicholas Gould, of Fenwick Elliott LLP, started the discussion with his presentation about the most common causes of  disputes in infrastructure projects. He further explained that the usual problems arise from firstly, project uncertainty, as the complexity of the project often surpasses Parties’ expectations, secondly, process problems including incomplete documentation and unrealistic anticipations and thirdly, issues related to people management such as poor communication or opportunistic behaviour. He then referred to the problem of appropriate processes of managing the project’s documentation. He acknowledged that managing, sorting and locating of relevant information in a fast and efficient manner is usually challenging due to the vast amount of data collected. Nicholas argued that the key to managing properly the documentation for construction projects is a good system for electronic filing and that  machine-learning based systems for locating documents are now becoming more helpful. He further referred to the case of Trant Engineering Limited v Mott MacDonald Limited, which was the first reported English case on BIM (Building Information Modelling), as an example of innovation in the construction dispute sector.

Subsequently, Matthew Smith (K&L Gates) presented on the challenges and opportunities relating to infrastructure mega project management including the reasons behind the rise of mega projects, characteristics of efficient mega project management, common mistakes and pitfalls when managing mega projects and legal mechanisms to avoid and resolve disputes. In his presentation, Matthew explained the format and scope of  mega projects and explained that conventional managing concepts are not suitable to extremely large scale investment projects dealing with oil and gas, mining, construction and transportation and that even the most experienced project managers face difficulties when approaching them. He then recalled a mega project as costing more than US $1 billion, the common coverage being between US $50 to 100 billion, often characterised by comparably high benefits and corresponding high risk. It is worth noting that total global spending on mega projects amounts to 8% of the global GDP. Matthew further made an eye-opening comparison when  comparing  managing a normal construction project to owning a driving licence and running a mega project to ‘piloting a jumbo jet’. He then proceeded giving a few examples of recent mega project including the Hong Kong–Zhuhai–Macao Bridge, which is a 55-kilometre (34 mi) bridge-tunnel linking Hong Kong, Macau and Mainland China.

Nita Mistry, of K&L Gates, then extended the discussion and concentrated on arbitration proceedings arising out of such large investments. She first explained that legal project management is of key importance when resolving mega projects disputes. Nita further explained that in mega project arbitrations, multiple law firms are usually involved, together with experts and a significant number of clients which requires communication and effective coordination. She then gave an example of representing co-ventures in complex disputes in which the interest of each company in the structure needs to be taken into account. As a potential solution for handling those complex disputes, Nita suggested to split the arbitration processing into at least two parts, which involves (1) separating jurisdiction and merits, and then merits into questions of liability and quantum; and/or (2) splitting issues according to the parties involved; and/or by particular issue.

Rebecca Shorter (White & Case) made a presentation about the use of multi-tiered dispute resolution clauses in complex infrastructure agreements, their suitability for big infrastructure projects and the common challenges faced in relation to their enforceability. She first explained that multi-tiered clauses contain a specific reference to various methods of Alternative Dispute Resolution (ADR) including neutral evaluation, negotiation, mediation and arbitration or litigation. She described the various benefits to multi-tier dispute resolution clauses which aim to reduce the scale and number of disputes, to keep the project in motion and to maintain a good commercial relationships between the parties. In reference to the future trends regarding multi-stage clauses, Rebecca pointed out to the newest versions of FIDIC and NEC4 contracts which include several multi-tiered provisions. She further referred to the 2018  White & Case x Queen Mary International Arbitration Survey which reveals that multi-tiered clauses have an equal proportion of supporters and opponents. The advocates for the clauses praise their efficiency and their ability to avoid disputes and resolve disagreements relatively inexpensively at an earlier stage. The opponents, however, point out that when the dispute is inevitably heading for a final decision, going through the steps required by multi-tiered clauses is a waste of time. From a practical perspective, Rebecca advised to consider pros and cons of those clauses while drafting the contract and to adjust the wording of the clause to the requirements of each  particular project.

The last presentation of the first panel was given by Olena Gulyanytska FCIArb (CIArb DAS) who focused on the growing use of Dispute Avoidance Boards (DABs) and Conflict Avoidance Boards (CABs) in domestic and international construction disputes. She defined DABs as panels of neutrals with specific expertise and qualifications, providing constructive services through the competition of the project. She emphasised that the main objective of the DAB is to avoid the dispute rather than to pass the dispute from one stage to the other. Olena then analysed the key features of the CIArb Dispute Avoidance Board Rules 2014. While referring to the effectiveness of the CAB, Olena provided the audience with some impressive statistics indicating that 60% of projects with CAB had no disputes and 98% of disputes referred to a CAB did not lead to litigation or arbitration. While describing the trends for the future in construction disputes, Olena predicted a growing use of dispute avoidance mechanisms and an increasing number of services becoming available to facilitate this such as CIArb Early Neutral Evaluation, CIArb DAB and CIArb CAB.

The first panel debate was followed by a lively Q&A session. 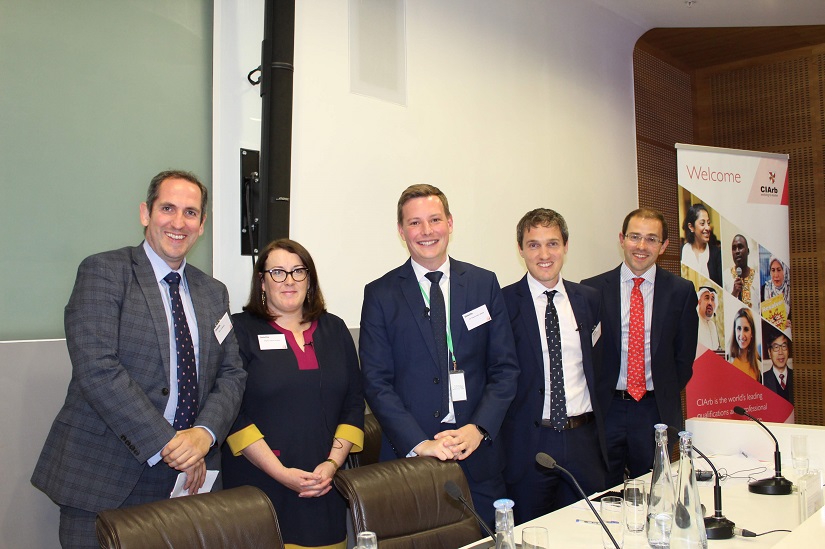 Alex Lubbock, of the IPA, started his presentation with an introduction of the IPA and Transforming Infrastructure Performance. Touching on strategy and policy relating to Smarter Infrastructure, including digital and manufacturing technologies, Alex discussed how innovation helps to prevent and avoid operational and financial risks in infrastructure disputes. In his presentation, he referred to the two commonly mentioned challenges of the publicly funded project such as low performance and low productivity. In his opinion, the first step towards innovation is not necessarily the ground-breaking technology but the change of culture including more transparency and accountability. He explained that transparency is the first step towards accountability and encouraged the audience to start using opportunities to change the way of thinking and implement new creative ideas.

Marie-Claire O’Hara, Laing O’Rourke, presented on the topic of ‘Securing performance and issues of contracting for JVs’. She explored issues in contracting, risk allocation and risk management from the perspective of the contractor acting on large-scale infrastructure projects. She further discussed the approaches taken to securing performance from critical suppliers. While referring to the importance of supply chain management, Marie-Claire underlined that the required skill set to manage huge infrastructure projects is changing. She then explained how BIM and cloud-based construction software platforms facilitate the process of managing relevant data.

Dr David-John Gibbs (HKA) provided insight into claims and dispute causation on major capital projects worldwide. He shared the findings from his latest research project and the underlying data in the context of his recent client work. At the beginning of his presentation, David-John explained the origins of his interest in BIM and digital ways of helping to improve project management and resolving disputes. He then presented the impacts of digitalisation on both claims and disputes. He explained how information liquidity and on-demand access to project data reduces the likelihood or need for global claims. David-John pointed out that the ability to better evidence claims,  as a result of readily available data, increases the number of commercial settlements. Furthermore, data-driven decisions reduce the likelihood of the escalation of the disputes. 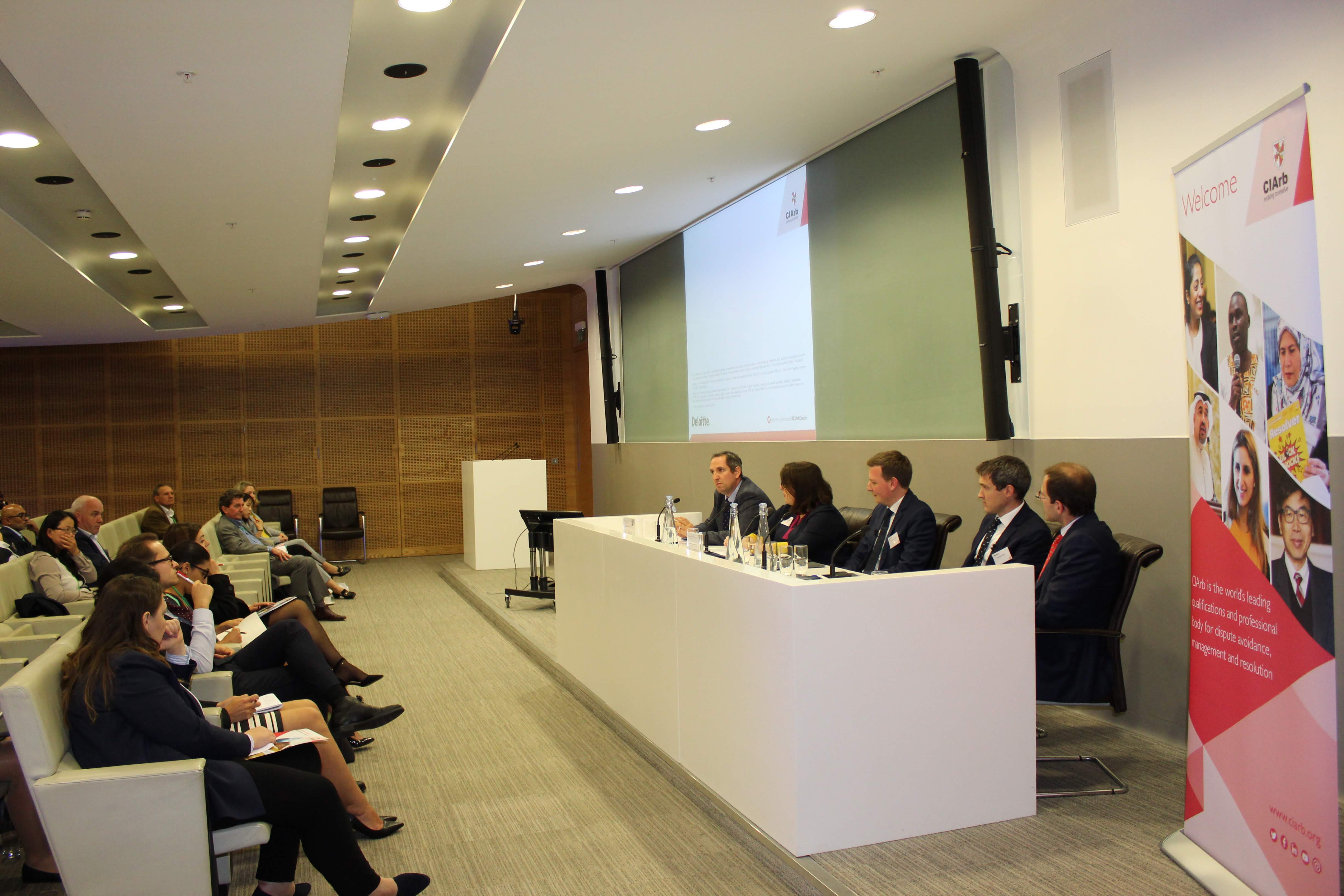 In the last presentation, Laurence Morgan, of Deloitte LLP, touched on the financial distress in the industry, with a particular focus on PFI project disputes. His presentation provided examples of PFI failures and the challenges involved in resolving disputes on termination. He further elaborated on the steps which need to be taken in order to avoid project failure. In this regard, he mentioned compensation on termination, scenario analysis, contingency planning and enforcement options.

The second panel session was followed by a networking session with drinks reception generously hosted by Deloitte LLP.

Photos from the event are available here.

On 8 June 2022, the International Federation of Commercial Arbitration Institutions (IFCAI) appointed CIArb’s Director General, Catherine Dixon, to its Council along with several other new Council Members, all of whom are prominent and influential members of the ADR community.

On 27 May 2022, the newly launched CIArb Pakistan Branch held its inaugural Conference on Judicial Perspectives on Domestic and International Arbitration in Pakistan.

On 8 June 2022, the Master of the Rolls and Head of Civil Justice in England and Wales, the Rt. Hon. Sir Geoffrey Vos delivered the 12th Roebuck Lecture on “Mandating Mediation: The Digital Solution” at 12 Bloomsbury Square to both an in-person and online audience.