After a sincere and heartfelt welcome by the CIArb’s Director General Catherine Dixon, wherein she highlighted CIArb’s commitment to its global member base and the development of rule of law and access to justice through alternative dispute resolution (ADR) it was time for the 2021 Roebuck Lecture on ‘The impact of Singapore Mediation Convention on mediation and arbitration’, given by The Hon. Lady Justice Joyce Aluoch EBS CBS MCIArb, (Rtd) Judge to begin in earnest.

After her opening remarks, the discussion around the Singapore Mediation Convention begun. “I believe many of you were at the signing ceremony in Singapore”, she noted. Adding that “the [Singapore] Convention could not have come at a better time as it came into force at the same time as the disruption of the global pandemic.”

Noting the unique nature of the Singapore Mediation Convention, Justice Aluoch noted how “the Convention was adopted by the UN General Assembly. 46 states signed the Convention there and then and today it has 53 signatories – including big economies like the U.S., China, India and many more.”

Lady Justice Aluoch then continued on to provide an explanation of what mediation and arbitration is and their respective descriptive features and unique qualities. She especially emphasised the definition of mediation in the Convention, exclusions from the scope of the Convention as well as provided interesting commentary on the formalities that has to be undertaken in order to secure enforcement under the Convention. She also offered guidance on the topic of grounds for enforcement refusal, the latter including the very current challenge of party incapacity and serious breach by a mediator as well as reciprocity requirements under the Convention.

On the topic of the Singapore Convention itself, Justice Aluoch stated that “[e]ven though the Convention entered into force not long ago, there has always been lots of skepticism surrounding its necessity.” “For example,” she continued, “because of the fact that parties engaged in mediation agrees to be parties voluntarily. Moreover, the requirement to secure the mediator’s confirmation and absence of clarification of who qualifies as a mediator cause a lot of disparities.” “However,” she concluded, “the Convention is a very young instrument, and its success will be measured by the number of ratifications and how extensive its use will turn out to be.”

“The Convention is a new instrument aimed at facilitating the resolution of international commercial disputes by rendering international mediated settlement agreements enforceable. This is a significant feature, previously awarded only to arbitral awards and come court judgements. It complements the New York Convention – but does not compete with it.” 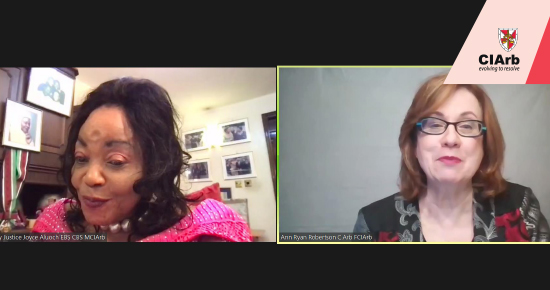 During this session, Judge Aluoch and Ms Robertson discussed – inter alia – refusal of enforcement based on serious breach by the mediator, what is implied by serious breach as well as how it is measure – seeing that there is no explanation of the term in the Convention text.

Asked by Ms Robertson about whether the Convention is capable of streamlining the process in countries that have ratified the Convention and those that have not, Justice Aluoch pointed to the fact that the Convention might in fact open the door for a more widespread use of mediation in different jurisdictions. She also mentioned that specific legal training rarely is required by the parties, unlike specific knowledge of the subject matter of the dispute at hand.

On the latter topic, Justice Aluoch argued that when acting as a mediator, she always uses a flipchart and once the mediation has been finalised with parties having achieved consensus she asked the parties involved to confirm what they agreed to. “Lawyers are the ones who usually put the final agreement in writing, but parties always participate”, she added.

“An ounce of mediation is worth a pound of arbitration and a ton of litigation”, Ms. Robertson concluded. 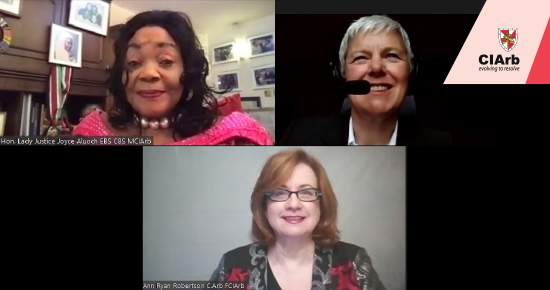 The Roebuck Lecture, now in its 11th year, is named after the late Professor Derek Roebuck MCIArb and celebrates the very significant contribution he has made to the Institute over the years, principally as Editor of Arbitration: The International Journal of Arbitration, Mediation and Dispute Management.
A book has been published in his honour, entitled “Lawyer, Scholar, Teacher and Activist: A Liber Amicorum in Honour of Derek Roebuck”. This collection of essays, lectures, tributes and reminiscences honours the life, work, influence and achievements of Professor Roebuck. He was a scholar, teacher, lawyer, prolific author, researcher, editor, human rights activist, feminist and creator of a widely acclaimed ten-volume series chronicling the international history of arbitration and mediation from Ancient Greece to the 'Long' eighteenth century (1700 - 1815). The scholarly contributions embrace a wide variety of subjects and reflect the breadth of Derek's interests, learning and expertise. The diversity of Derek's interests and the esteem in which he was held are reflected in the broad array of contributions penned by colleagues, co-authors (including Derek's wife Susanna Hoe), students, friends and other contemporaries from an equally broad array of backgrounds. The book can be ordered from Holo Books at a discount.

CIArb's Thailand Branch was founded around 25 years ago. The branch currently has about 80 members.

The Chartered Institute of Arbitrators expresses its sincere condolences to the family, friends and colleagues of Thomas D Halket who sadly died on 24 November 2021 after a short illness.

We are delighted to announce that CIArb has been awarded the contract to be the sole provider of Arbitration Referral Services to the Pubs Code Adjudicator (PCA).